Writing the Image After Roland Barthes

Narrative liasons: Roland Barthes and the Dangers of the Photo-Essay

Roland Barthes said: “Naturally, several photographs can come together to form a sequence….;the signifier of connotation is then no longer to be found at the level of any one of the fragments of the sequence but at that – what the linguists would call the suprasegmental level – of the concatenation” (Rhetoric of the Image)

“Wisconsin Death Trip is a book I come back to again and again, although it chills me to my bones. In the early Seventies, author Michael Lesy assembled dozens of glass plate photographs, all taken in Jackson County, Wisconsin at the turn of the 19th century, and offering a strangely intimate view of life—and death—in a small town of the era. The Wisconsin Historical Society has set up a flickr stream showing some of the photos used in the book, including the stark, sad high Victorian funereal images, bleak towns and unsmiling overdressed women.

Lesy accompanied these with text taken directly from the local papers, mainly the Badger State Banner, stories of wild gangs of armed tramps, death by smallpox, and even tales of witchcraft. The result is unsettling, but completely compelling. The book became a touchstone in the early 1970s counterculture”

Example page from the book: 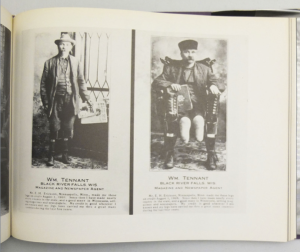 “Each society has its regime of truth, its ‘general politics’ of truth:
that is, the types of discourse which it accepts and makes function as
true; the mechanisms and instances which enable one to distinguish true and
false statements, the means by which each is sanctioned; the techniques and
procedures accorded value in the acquisition of truth; the status of those
who are charged with saying what counts as true.”